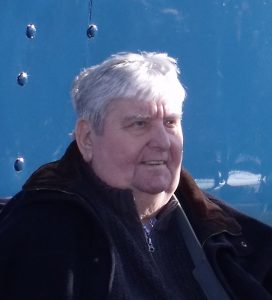 Johnnie Jones was one of the founders of the Newton Aycliffe Exhibition and a member of Rotary Newton Aycliffe for over 30 years, a lovely man always willing to help anybody. John H Jones (Johnnie) had always wanted a model railway, he acquired a cricket pavilion around 2010 and invited his fellow enthusiasts in Rotary Newton Aycliffe to build a layout in one half of the building, a space of some 16ft square. Johnnie wanted trains running based in “00” and set in the North East during the early 1950’s (i.e blood and custard coaches) The layout was formed of four continuous run circuits, two branch line shuttles, a goods yard and a narrow gauge colliery system. The colliery had working Bachman headgear utilising two old Tri-ang chassis and a very large slag heap. Buildings were mainly Metcalfe Models including a double length viaduct split in two lengthways. Johnnie enjoyed watching trains run and had a particular pleasure in naming shops after friends, hence the alms-houses were named after his wife Freda, the undertaker and electrical shop were lifelong friends. Rolling stock was mainly second hand, Johnnie and friends would scour exhibitions for items and rarely came away empty handed, some 20 locos, 50 coaches and around 60 wagons provided plenty of choice for variety. The Peco track stretched to over 100 meters in total. Johnnies’ friend and co-founder of the Aycliffe Exhibition, John Burrows was honoured when the layout name was announced.  Sadly Johnnie passed away in 2014 and is deeply missed.