“North East Junction” came about due to me collecting a large number of BR Steam period Locos over many years but having nowhere to run them. I wanted to make the layout as true to period and region as possible so I decided that a scenic layout with no station would be the simplest answer. The only identifiable building is the signal box which is painted in BR(NE) colours, this is removable and replaced with a BR(SR) box at home where I run the layout as “South West Junction”. I’m now collecting Western Region locos with the idea of changing the signal box to a ex-GWR style and the layout being exhibited in the future as “Western Junction”. For this show though it will be “North East Junction” and set in the period 1959-64.

The layout represents a fictional junction in the North East on the East Coast Main Line where a branch line/diversionary route diverges from the ECML. The diversionary route has a gradient heading south from the junction into a seven road raised fiddle yard. The mainline at baseboard level also has a seven road fiddle yard, all the roads on the layout can host lengthy trains suitable for main line running. The layout is basic analogue ,powered by two twin Tasma transformer/controllers ,all points are electrified using Peco point motors with Probe and Stud control. There’s only one working signal at the moment , fitting more is the next project. It’s not a particularly complicated layout , there’s no shunting for instance , its purely for the enjoyment of running trains. 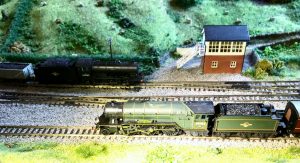 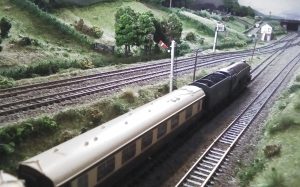 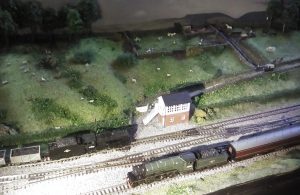 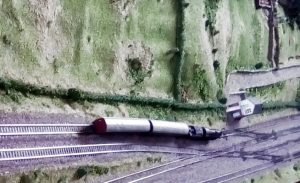