BAVARIA 1910 (HO)
Raven miniatures
Sparkel depicts a fictitious small terminus in Bavaria (Southern Germany) around 1910.
The layout took around five weeks to build. It measures 10’ x 1’3” and rests on my trusty black & decker ‘workmate’ – this has been with me almost as long as my wife, meg, and somedays  it’s a close call as to which is the more useful!!
Track is peco code 100. Stock is a mix of fleischman, trix, roco and lilliput. Kd magnetic couplers are fitted to all stock giving (on a good day!) fully automatic coupling and uncoupling. Control is dc – the layout is coming up for 20 years old and predates our dcc efforts but is meg’s favourite of all our layouts and i’m forbidden to change it!!
There are a number of cameo scenes and some operating features. Look out especially for Heinrich the hare as he pops up from behind a bush to see the trains.
The backscene is hand painted including the town square buildings. The other buildings are a mix of kits and conversions.
Sparkel was featured in the September 2007 edition of continental modeller.

Norm, Meg, Melissa, and Simon, and
Jos and Arion (the horses) – Raven Miniatures

Sorry no video but please enjoy the images 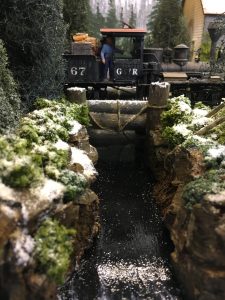 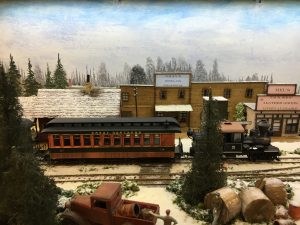 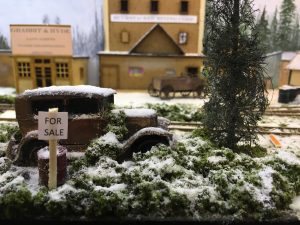 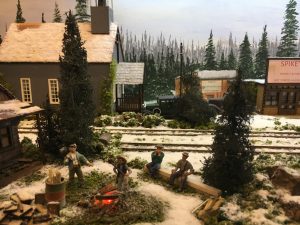 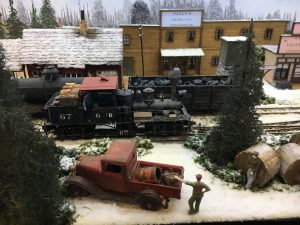 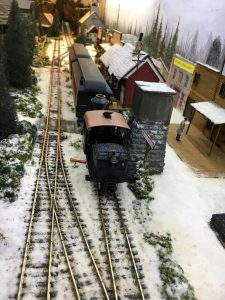 Goose Lake is one of our older layouts and was due for sale but is having another run out for old times’ sake.
The layout was built in five weeks to meet an exhibition deadline. It measures 12’ x 1’3” and rests on my trusty black & decker ‘workmate’. This has been with me almost as long as my wife and some days it’s a close call as to which is the more useful!
The time is the late 1950s and a branch of the northern pacific railroad is represented before its eventual merger into the Burlington Northern Railroad. Both steam and diesel traction is in evidence although steam is very much in decline. However, shay and climax locomotives operate on the logging and mineral lines which use the yard to reverse trains heading for destinations down the line.
The layout operates on digital command control (dcc) powered by an old north coast engineering system. All the locos are sound equipped. The layout also features ambient sound – with birds at the waterfall and the seagulls at the harbour (with the correct American accents!) for the sanity of the neighbours, we don’t run these all the time!
Rolling stock is equipped with the kadee magnetic coupling system which gives (usually) hands free coupling and uncoupling. 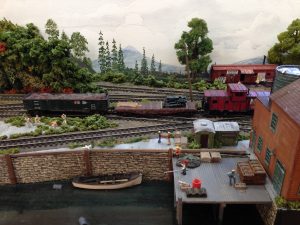 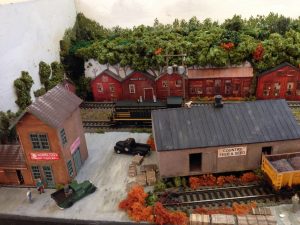 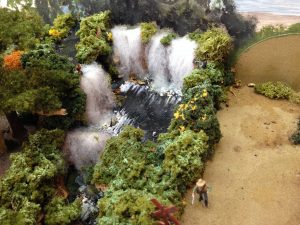